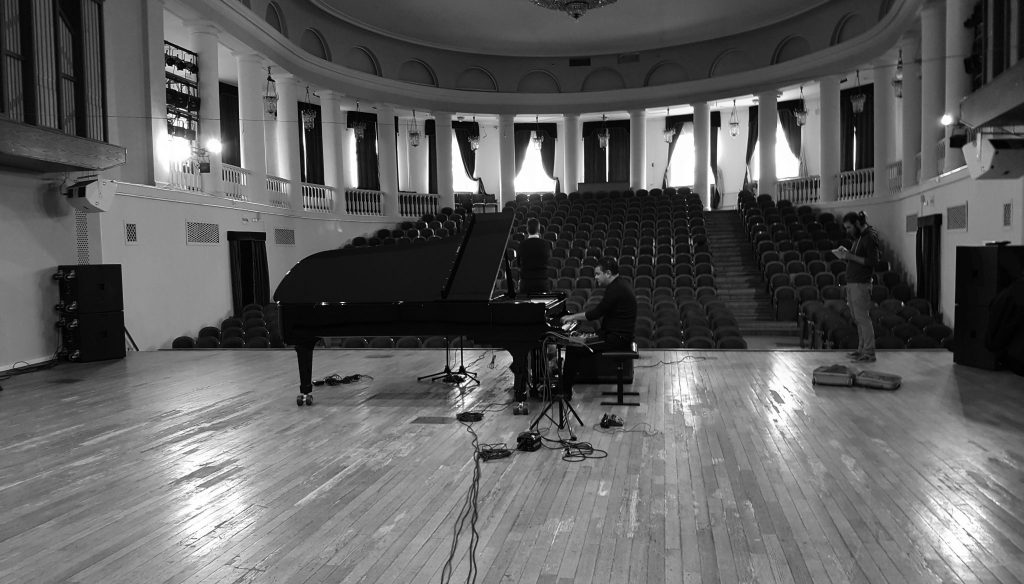 Bruno Sanfilippo is a classically trained musician, producer, and composer based in Barcelona who writes for strings, piano, and electronics. He alternates between the exploration of minimalist piano concepts and electro-acoustic compositions, obsessively seeking out the new and the magical. In dreams, there is nothing too strange or wonderful, and Sanfilippo’s music comes from the same inexhaustible source.

He began playing piano as a child, on an old Pleyel upright at his parents’ house in Buenos Aires. Although inspired by several different types of music, his early years were influenced by composers like Erik Satie and Claude Debussy, and contemporary musicians such as Arvo Pärt, Brian Eno, and Harold Budd. His first recordings were released in 1991, and in 1998 he started as a producer for ad21, a personal platform and label that has released the majority of his albums (2016’s The Poet was released by 1631 Recordings and Decca Publishing, while Unity came out on Russian label Dronarivm, in 2018). He has also collaborated on several projects with the labels 7K! and Thesis.

His Piano Textures series, started in 2007, is one of Sanfilippo’s most representative set of recordings, but he has also gained wider recognition in modern music – a sample of one of his piano compositions formed the basis for Canadian rapper Drake’s seminal hit, ‘Started From The Bottom’.

In addition to recordings available on streaming platforms, Sanfilippo has a series of solo and collaborative albums that are available exclusively through Bandcamp, some of which were released by American labels between 2008 and 2012. Sanfilippo regularly performs at various live and multimedia events, and at festivals all over the world. 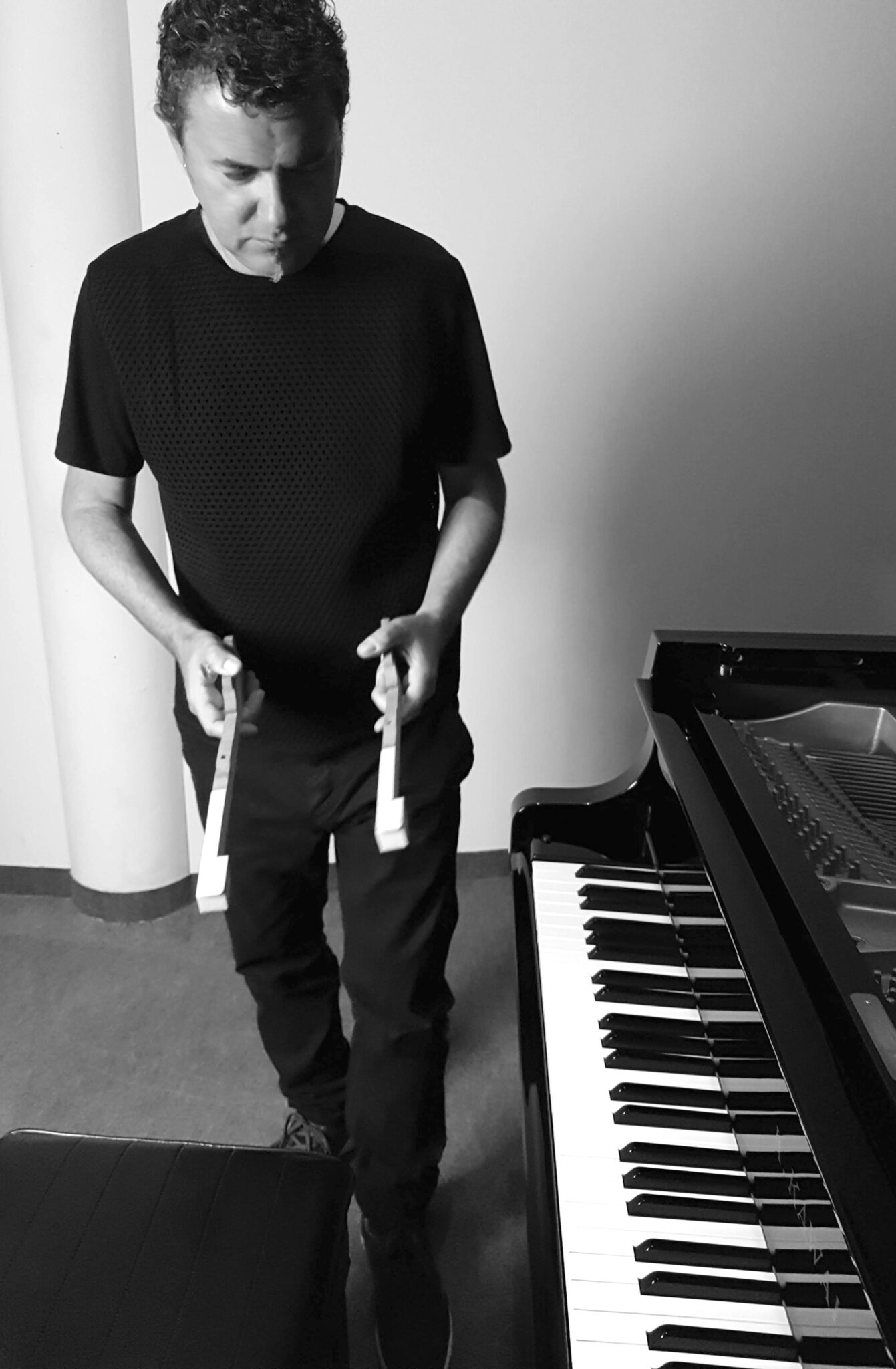 «In the last decade Modern Classical has soared in popularity for both releases and artists coming through the genre. Credit can go to the likes of Nils Frahm, Ólafur Arnalds, Max Richter, Jóhann Jóhannsson and labels like Erased Tapes and 130701 in helping popularize the music. You can add Argentinian Bruno Sanfilippo to the list» Drifting, Almost Falling

“Minimalist and modern classical piano music is a crowded genre nowadays, it can be hard to see the wood for the trees. But for his restrained but emotionally engaging compositions, his perfect sound quality and combining the sound of the piano with more experimental electro-acoustics, Bruno Sanfilippo can stand the comparison with fellow contemporary classical composers like Max Richter, Jóhann Jóhannsson and Harold Budd” AmbientBlog

… Had a listener’s only exposure to Bruno Sanfilippo come about through hearing his Hypnos recording Urbs, said listener would have identified him as an exceptionally refined sound-sculptor working in the electro-acoustic ambient field. But the classically trained Sanfilippo also issues minimalist piano recordings, of which Piano Textures Series is an impressive example. Textura.org

About Piano Textures.
… Simple and elegant, mesmerizing and haunting. I absolutely love turning up the volume, and letting
every hypnotic and melancholic note weep gently through the night. For the lovers of Max Richter, Alluvium, Rafael Anton Irisarri, and Zbigniew Preisner. I highly recommended this gem! Headphone Commute

“An old ‘Pleyel’ upright piano was waiting for me at home in Buenos Aries when I was born, and during my childhood I was never far from it – it was my first, and favourite, toy.
But losing the tip of a finger on my left hand in a domestic accident as a teenager left me traumatised, and I gave up piano for several years, shifting my focus to synthesizers and electronica.

However, my finger never lost its sensitivity, and I slowly got close to the piano again by studying harmony. My teacher used to tell me not to worry; Skriabin had short fingers too he’d say, and he played wonderfully. These days, I don’t even think about it anymore.

Years later, after I’d finished my studies at the Galvani Conservatory in 1988 I was frustrated that I couldn’t buy a better piano to aid my development. The old Pleyel that had seen me be born, whose hammers I used to put tacks on, no longer sounded so great when I played. Finally, in the early 1990s, I bought a decent piano, one I used to compose pieces for trios and string duets, recordings that I still have the masters of. At the same time, I started studying synthesiser programming and experimenting with samplers.

After that I released my first records; Sons Of The Light in 1991, and The New Kingdom in 1995. These are now out of print and will remain so, as I consider them to be mere sketches. In 2000, when I had finished composing Suite Patagonia and just after the financial and social crisis in Argentina, I had to emigrate to Spain with my wife, Ximena. We arrived in Barcelona alone, and with almost no money. The first years were hard, but we were excited about building a new life. I acquired a Korg TR-rack synthesizer and a Lexicon processor, both of which I used extensively on Visualia (2003), Ad Libitum (2004), and InTRO (2006). Later I got a Korg Radias; Auralspace (2009), Subliminal Pulse (2011), and Urbs (2012) used this alongside other electronic sounds and field recordings.

It’s only been a few years since I could finally afford a Grand Piano, which now sits downstairs in our house, in my studio. This time, I hope we will never be away from each other.”